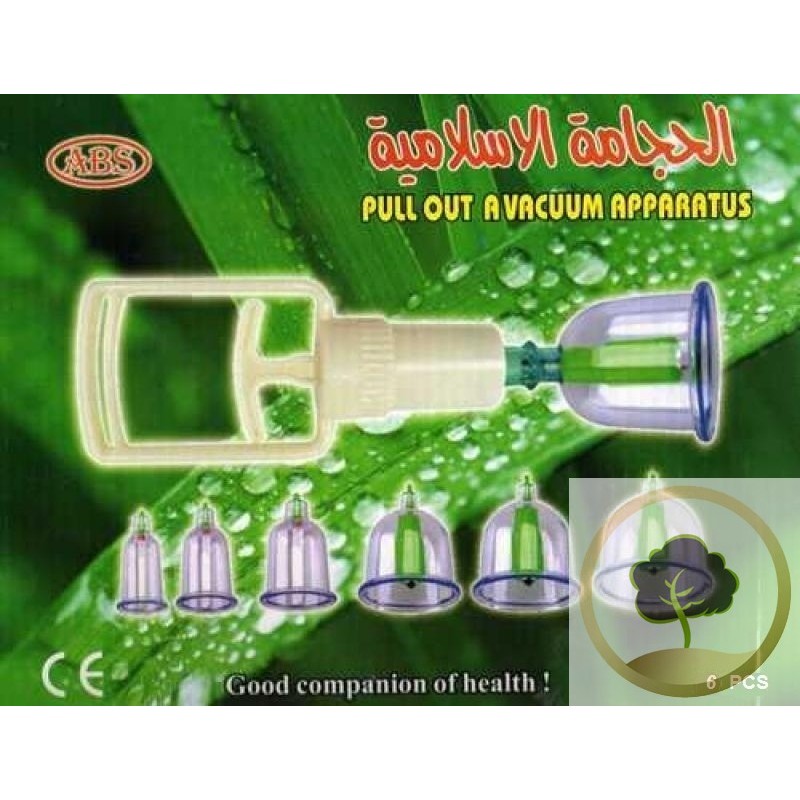 Our kit of Hijama consists of :

Hijama  is the Arabic traditional medicine for wet cupping, where blood is drawn by vacuum from a small skin incision for therapeutic purposes. It is reported that the Islamic prophet Muhammad said, "Indeed the best of remedies you have is hijama, and if there was something excellent to be used as a remedy then it is hijama.
Hijama can be performed almost anywhere on the body, often at the site of an ache or pain in order to ease or alleviate it. A more conservative approach warns against over use of cupping and suggests only that six optimal points on the body are all that is required to "clean" the entire cardiovascular system. The location is first shaved, if necessary, to ensure a tight seal with the cup. The mouth of a cup (metal, glass and plastic cups are generally used, although traditionally horns were used) is placed on the skin at the site chosen for hijama. Then a tight seal is created. The traditional method is to burn a small piece of paper or cotton inside the vessel, so that the mouth of the cup clings to the skin. Some practitioners now use a machine instead of the manual cups. Some practitioners still strictly adhere to the Prophetic method with the use of fire, both for sterility and the benefits or properties from the element of fire itself that may be present. The cup is left to cling to the skin for a few minutes, then it is lifted off and several very small incisions are made in the skin. The cup is then put back as it was before until the flow of blood subsides.Hijama is considered a form of energy medicine because it has been claimed to unclog the meridians in the body, and is viewed by some practitioners as a cure that can alleviate black magic and possession.

The strengthening and stimulating effects of Hijama therapy make it successful in treating the following conditions: fatigue, period pain, constipation and diarrhea, headaches, back pain, arthritis, injuries, asthma, anemia, depression and emotional problems, atrophy, sciatica, common cold and flu, skin problems, emotional problems, depression and much more. Traditional medicine tells us that all pain is due to stagnation of blood and Qi (body energy) pronounced as "chee".
The cups used in Hijama create a wonderful pulling power that reduces pain and enhances the mobilization of the immune system, stagnated blood and Qi.
Hijama therapy is effective in treating some clinical manifestations of external pathogens that are fighting at the level of the skin.
Hijama treatment releases toxins with minimal additional stress to internal organs and it directly de-acidifies tissues, enhances blood circulation, stimulates the immune system and reduces stress as it releases chemicals from the body that reduce stress and depression.
It also facilitates a sufficient flow of nutrition to the affected tissues and stimulates the flow of blood and lymph and so improves blood and lymph flow, and activates the function of the organs. Performing Hijama on the corresponding organ points is used to treat disorders such as liver and kidney problems, respiratory diseases, digestive disorders and some gynecological disorders. It can also be used to treat muscle spasms especially in the back. It is useful in treating painful joints, stomach-ache, vomiting and diarrhea.

What are these instructions and tips?

1) The bleeding by suction cups take place in the spring or early summer.

2) that are practiced on 17 or 19 or 21 lunar month because the moon these days is closer to the Earth, when the tide (the ebb and flow) intensifies. And as a human being is composed of 60% water, it affects the influence of the moon closer to Earth, so the blood is easily removed. Cupping (Hijama) during this period is a balance by removing everything that harms health. Ibn Al Qayyim wrote on this subject: "Because at the beginning of the month the blood is no longer an end ..... exitada (blood) is appeased." We found the same purpose in the book Al Qanonn (the Act) of Ibn Sina (Avicenna).

The hijama or bleeding by suction cups (cupping in English) is to extract the blood of determined areas of the body by scratches.

It is one of the oldest arts of care experienced by humanity. Its history dates back thousands of years. Sculptures relating to bleeding are the Pharaohs since it in theTemple Comombo in Egypt, the largest hospital of the time, a glass sculpture used to withdraw blood from the skin. Vacuum bleeding has been used and studied by the Chinese in the book of the Yellow Emperor as therapy of internal diseases since about 4000 years.
The Greek and the Arabs before Islam were familiar with this mode of treatment. At his coming, the Prophet Muhammad  has approved, practiced and advised the use of this therapeutic technique. He said: "If there is something of real healing among all your medications, it is vacuum bleeding or the honey bee or cauterization, and I don't like to be cautérisé.". And all such Muslim legal Boukhari, Mouslim... agree to cite the many authentic Hadith of the Prophet , regarding bleeding (hijama).

This practice was taken over by the companions of the Prophet  then, given the interest, adopted today. Many of the old Islamic medical books authors who have studied the bleeding and these therapeutic virtues. We include, Al Zahraoui, Mouafaq ad Al Baghdadi.Ibn Al Qayyim, Ibn Sinae (Avicenna), Assuyuti...

The Andalusian universities of medicine also taught this technique is the bleeding by suction as it was issued by the Prophet .

And the hijama was passed to Europeans by the universities of Andalusia. She had freedom of the city in Europe until the end of the 19th century. In the 20th century, the use of this therapeutic technique disappeared with the development of the contemporary medicine. With the discovery of the drugs while chemical-based, the thought fallen into disuse. But when it is found confronted with diseases new solutions and other diseases caused by chemicals, pollution and even by the harmful effects of chemical drugs. Doctors then referred, among other things, to the alternative medicine including the hijama.
Because of this, new schools were created and adopted the hijama. Seeing results more than conclusive in the United States and some European countries (such as the Germany and England), the practice of the hijama spread. For example, 38 States have opened clinics performing the bleeding by suction cups as a therapeutic technique.

The bleeding by suction cups is studied in textbooks of medicine to theUnited States under the name of "cupping therapy" and considered an important material in the faculties of medicine. In Germany, it is called FASK. What amazes is that this "Sunnah" (prophetic tradition) is revitalized by non-Muslims who, in the United States, in Germany and in other countries, is it appropriate or attribute it to the Chinese. Or its dissemination on the scientific and technical bases current returned to the Prophet Muhammad  then his companions and those who followed, more than 1400 years.

Before examining the extraordinary or even miraculous aspect of the hijama reported by the Prophet, be given a more precise definition of the Hijama. This last is scratched with a scalpel, enabling the bleeding in some areas of the body. These minor injuries that cause bleeding are always, initially at the level of the 7th cervical vertebrae. In addition to this region of the body points are added according to the disease.

The bleeding is done using glasses emptied of air to the scratched area, allowing the suction (following the negative pressure), hence the aspiration of the blood. Bleeding equipment is simple: it consists of a number of glasses, a scalpel (or razor) and disinfectant products.

The techniques of the hijama

There are 2 techniques of the hijama:

(1) Vacuum without scratch, so without extraction of blood. This technique is practiced in China, to the Japan, in certain countries in Europe and in the United States.
(2) The bleeding by suction itself (with scratch). It is this technique that was prevalent at the time of the Prophet Muhammad  and in some countries of Europe, including Germany. In this form of hijama, the skin is scratched on a length of 4 mm and a depth of about 1 mm. After having 15 scratches divided into three bands, is the glass top to the aspiration of the blood for a period not to exceed 10 minutes. Can renew the laying of the glasses up to 5 times if necessary. As soon as blood stops, stop the operation. Finally, it should be to disinfect the place wounded by honey bee or the oil of nigelle or by a local antibiotics like Fucidin cream.

The modern points of application of the Hijama

For the modern Hijama, there are 98 points, 55 are located on the back, 43 on the face and belly. At each disease; There are points specific to the Hijama, the most important of these points is the 7th vertebrae-cervical level,It is also the common place of all diseases and by which we always start.

That is, at the level of the shoulder and down the neck. Indeed, the multiplication of the parts of the body where the Hijama is returned to the multiple implications and influences on the functions of the body. It operates from the meridians of Chinese acupuncture. Knowing that with the Hijama, you arrive at results ten times better than what is obtained with the Chinese practices. This is may be due that acupuncture involves only a small point and specific, the Hijama is running on a circular position of approximately 5 cm in diameter.

Thus, could determine the positions of these points by an acupunctoscope. Because of the existence on the spinal cord of common point between the nerves that go to some internal organs and those who get excited some areas of the skin, the stimulation of these causes a stimulation of these organs. Thus, for each disease appears a reflex position depends on the terminus of the reflexes nerves, called: the reflex. For example, the stomach has two points in the back and when he is suffering from a disease, we practice the Hijama on these two points, so the Pancreas, he has two points, the Colon 6 points etc.

The Hijama is also on the lymphatic system, it revives the, which reinforcesthe immunity of the body and therefore, she helped him to resist infectious diseases.

Likely to be treated by the Hijama diseases

The Hijama is useful against all diseases:

(1) Prevention against the disease. Where the person is healthy, he can practice the Hijama once per year;
(2) It can completely cure some diseases;
(3) It is useful for strengthening immunity and for the improvement of the blood circulation in the body. Thus, it improves the recovery of the body;
(4) It is also regarded as an analgesic technique, or a complementary care for other diseases. It should be noted that the Hijama is useful in about 80% of diseases and symptoms, including: rheumatism, arthritis, gout, thyroid disease, sexual impotence, hypertension, Ulcer of the stomach, the varix legs and testicles, the functional mucus, atherosclerosis, diabetes, obesity, anorexia, infertility,partial and total, migraine disease of the eye, liver and kidney, hearing difficulties, seizures, cerebral atrophy, Breakthrough bleeding, etc 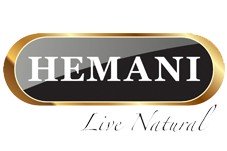