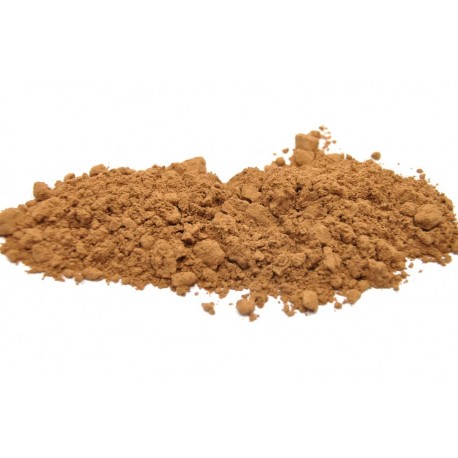 Our Carob Powder originating in Morocco is for all your dishes, drinks, desserts, sweet or savoury dishes. You will be able to perform very many recipes with this powder, very sweet and rich in flavours.

Carob health benefits. Used as healthier alternative for cocoa and chocolate products, It has anti-oxidant properties and can prevent cancer...

Carob use warning and cautions. carob is generally safe for human consumption even for children and pregnant women.

Nutrition and Health Benefits of Eating Carob
Carob tannins contain Gallic acid that works as an analgesic, anti-allergic, antibacterial, antioxidant, antiviral and antiseptic.
Carob improves digestion and lowers cholesterol level in the blood.
It is used for treating diarrhea in children and adults alike.
Since it does not contain caffeine, carob benefits people with high blood pressure.
Regular use of carob helps in preventing lung cancer.
The vitamin E content in carob helps in treating cough, flu, anemia and osteoclasis.
The Gallic acid in carob helps in preventing and treating polio in children.
Carob fights against osteoporosis, due to its richness in phosphorus and calcium.
Carob pod husks are chewed by singers to clear the voice and throat. 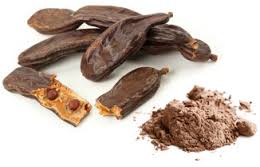 Carob is a tree. Don’t confuse carob with Jacaranda caroba which is also known as carob tree. People use the carob fruit for medicine and in foods.

Medicinally, carob is used for digestion problems including diarrhea, heartburn, and the intestine’s inability to properly absorb certain nutrients from food. These absorption disorders include celiac disease and sprue.

Other uses of carob include treatment of obesity, vomiting during pregnancy, and high cholesterol.

In infants, carob is used for vomiting, retching cough, and diarrhea.

In foods and beverages, carob is used as a flavoring agent and as a chocolate substitute. Carob flour and extracts are also used as ingredients in food products.

How does it work?
Carob contains chemicals called tannins, which decrease the effectiveness of certain substances (enzymes) that help with digestion. Carob might cause weight loss, reduce blood sugar and insulin levels, and lower cholesterol levels.

Use of the carob:

No toxicological study was undertaken to determine the maximum dose to use. Therefore, to rely on traditionally used doses, or 20 to 30 g of carob powder dissolved in a hot liquid such as water, tea or milk, once per day.

The high-fibre of the carob suggests that it could reduce blood cholesterol levels. In 2010, researchers studied the effects of consumption of carob fibers rich in polyphenols on 88 individuals with hypercholesterolemia. The results of this study indicate that this consumption decreases after a month the levels of total cholesterol (-18%), LDL cholesterol 'bad cholesterol' (26%) and triglycerides (-16%)

Carob is generally safe for consumption. Even for children, pregnant women and breastfeeding mothers.

The appropriate and acceptable dose of carob for use as treatment depends on several factors such as the age, health condition, and others conditions.

While carob is generally safe to use, there is however no sufficient scientific study that can tell that it is entirely safe for use at any dosage. Be sure to follow instructions as suggested in the product label or as suggested by your health provider.

Carob is LIKELY SAFE for most people when taken by mouth in food amounts or as a medicine. There don’t seem to be any unwanted side effects.

Special Precautions & Warnings:
Pregnancy and breast-feeding: There is not enough reliable information about the safety of taking carob if you are pregnant or      breast-feeding. Stay on the safe side and avoid use in greater than food amounts.

Carob gum is use with caution:

-Diabetics because it may reduce the glycemic response of insulin.

- Patients with kidney failure because it littlet cause a drop of urea and creatinine (= hormone secreted by the pancreas).

-for patients suffering from anemia because it could reduce the absorption of iron.