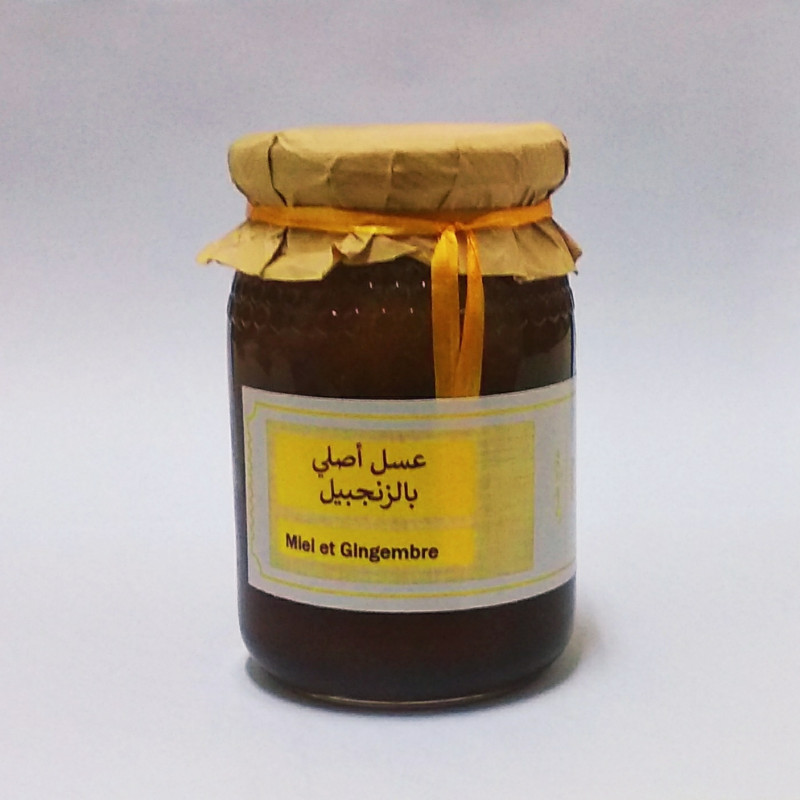 The honey and ginger tonic is best known as a remedy for digestive issues.
The recipe is very, very simple but the effects, as I can personally testify, are nothing but amazing.

100% natural honey produced in France by a beekeeper, and Ginger originating in Morocco, prepared by the Biladishop family.

The honey and ginger tonic is best known as a remedy for digestive issues. Like a natural herbal antibiotic, the spicy mixture, with its broad-spectrum of inherent antibacterial, antiviral and anti-parasitic properties, volatile oils and phenol compounds, is touted for the following medicinal benefits:
1. Stimulates the body immunity of those with a weak digestion system.
2. Fights toxins, aids in moving food through the stomach and digestive tract.
3. Treats stomach upset, nausea, vomiting, and diarrhea.
4. Relieve bloating sensation and colic conditions.

Ginger is well known old remedy, a root like plant from Lilac family, used originally in China from where it spread throughout the world.
It is used heavily in Ayurvedic and oriental medicine.
There are so many health benefits that it’s hard to list all of them, so here are just a few:
– good for fighting stomach ulcers and intestine problems, used to cure gastritis, ulcer and other digestion issues
– it is used as pain killer, digestive and antioxidant
– builds up immune system
– helps prevent period pains, diabetes, dermatitis, migraines, arthritis, skin diseases, bad circulation, flu, rheumatic pain and certain types of cancer

It doesn’t have any heavy side effects but it should be used in moderation to maintain the balance of elements in the body.

Honey is as potent as ginger and is good for:
– reducing the risk of heart diseases
– helps prevent tumors and cancer
– stomach and intestines problems, used against gastritis and stomach ulcers
– helping with reducing weight
– infections and other body inflammations because it has great antiseptic properties
– soothing cough and irritated and inflamed throat
– boosting the immune system

Aperitif, protective effect on gastric mucosa (stimulates salivary secretion of gastric juices, and bowel movements)
• It is a carminative effective helping to expel intestinal gas and to fight against painful spasms. It is used to reduce flatulence and bloating but also for chronic diarrhea. Digestive, it stimulates the production of bile, which facilitates the digestion., fought the pancreatic insufficiencies
• An anti-inflammatory, antibacterial, antiseptic, antimicrobial, nematocidal, molluscicide, antischostosomal,.
• Ginger proved effective as a febrifuge, antiseptic, analgesic and an expectorant that is why he is often involved in the remedies for fever, infectious diseases, bronchitis, cough, flu, and sore throats
• relieves the circulatory problems, decrease the rate of cholesterol, blood triglycerides, fatty acid and Phospholipid.
• Antiemetic, it recognizes also the relief of the motion sickness or disease of the transport.
• Against headache, against rheumatism
• Veterinary uses: to proclaim the horse colic and bronchitis
• Several recent (2003, 2004, 2005) summaries of researchmedical provide evidence demonstrating that the rhizome or root of ginger can reduce or relieve the nausea of pregnancy and post-operative nausea. Chinese women traditionally use the root of ginger during pregnancy to combat nausea in the morning.
• Finally it is renowned for its aphrodisiac power in sexual asthenia. Ginger was refreshing and vaso-dilatatrices functions on the bodies of the basin, where the aphrodisiac virtues that him are loaned on many continents .