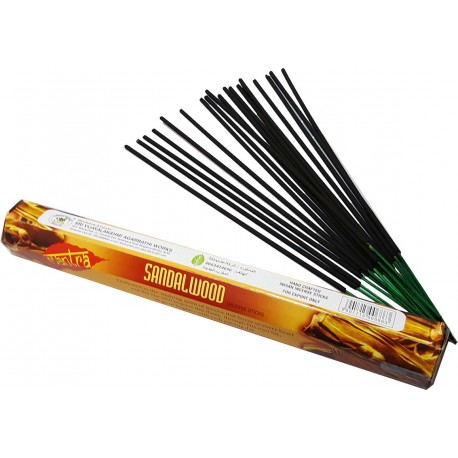 The smell of wood incense

The smell of wood incense The incense, presented in the form of sticks, can also be used to scent a room or for a spiritual approach during prayer or meditation. Indeed they promote relaxation, peace of the soul, the inner well-being... top of the form The package contains 20 incense sticks wood.

Incense with the smell of wood
Incense, presented in the form of sticks, can also be used to perfume a room or for a spiritual approach during prayer or meditation. Indeed they favor the relaxation, the peace of the soul, the inner well-being ...
Sandalwood Incense
Provenance: India, Pacific Islands
Used as a component of incense for 4000 years. Sandalwood has long been used by the Chinese. In India, some temples were built of sandalwood. Would it seem that the smell still emanates today. In addition, in Hawaii, some homes were built with sandalwood beams. Egyptians imported it for use in medicine and in the practice of embalming. Buddhism considers it one of three integral incense with agar wood and clove.
Uses:
We discovered thousands of years ago that the smell of sandalwood makes spirituality. He prepares very well for rituals of all kinds.
Sandalwood is also sometimes used when a person suffers from sexual dysfunction because it is known to be aphrodisiac.
In Asia, some esoteric shops sell small sandalwood animals for use at home.
Sandalwood, often used in this way, is excellent for making an offering to the deities.